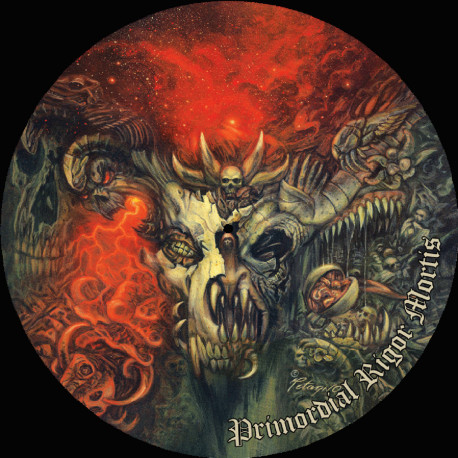 All-star line up doing ‘Paleo Metal’ project: PRIMORDIAL RIGOR MORTIS
Swedish paleontology professor and metal devotee Mats E. Eriksson invited some of his favorite musicians and recorded an album that sonically pays homage to a group of exceptionally preserved, half-a-billion-year-old fossils, which is target of his research. Eriksson says he approached the musicians with the following mindset; “not only am I a major fan of their respective work but I also focused on perceived personalities, i.e., individuals that seemingly ooze dedication combined with a jovial disposition. And of course musicians who might appreciate science and, not least, quirky and unorthodox combinations. Man, was I proven right!”

The PRIMORDIAL RIGOR MORTIS record features four tracks with lyrics penned by Eriksson (SPIDER DEATH BC). The lines deal with the extraordinary, so-called ‘Orsten’ fossils from the Cambrian Period (c. 541-485 million years ago) while simultaneously being staged in a dark, ‘metal’ landscape. For this project, Eriksson worked closely primarily with Tomas Andersson (DENATA, SEANCE, FREEVIL) as the main music composer, instrumentalist and sparring partner. The cover artwork of the record features a stunning painting by the one and only Joe Petagno, who made his own interpretation of the force of nature killing off and preserving the ‘Orsten’ creatures.

The third track “Primordial Rigor Mortis I” is sort of a cross-over composition; thrashy rhythms meet more melodic and traditional style metal. Composed by Andersson it features vocalist extraordinaire Charles “Chulle” Rytkönen (MORGANA LEFAY, CIBOLA JUNCTION), while also flavored by some Andersson growling. As icing on the ‘Paleo Metal’ cake, there is an alien-esque guitar solo by none other than the astonishing Mattias “Ia” Eklundh (FREAK KITCHEN).

Collector’s edition 12”, 45 RPM picture vinyl record, limited to 250 hand-numbered copies worldwide . Of course the vinyl is pressed on authentic fossils! All tracks were mixed by Mique Flesh (SEANCE, FREEVIL, ex-WITCHERY) and the record is self-released by Eriksson, who also produced all songs together with Andersson. Eriksson says “I could not have been more proud and pleased with the outcome and I extend my deepest gratitude towards all amazing people involved in this project”. Horns up!