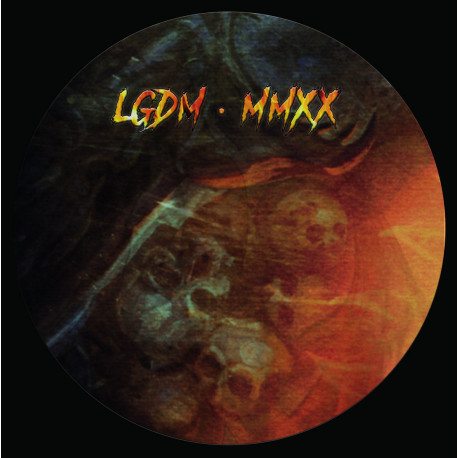 Strictly limited to 99 copies worldwide.
Same track on A/B side to play the hell out of this masterpiece =)

New song out now based on the extinct monster worm named after Alex Webster of Cannibal Corpse; “La Grind Danse Macabre – starring Websteroprion armstrongi”. This is the fourth “Paleo Metal” project by Swedish paleontology professor Mats E. Eriksson in which he once again teamed up with Tomas Andersson (Freevil, Denata and Seance) as main composer. Together they have now released an unholy death’n’roll track which includes almighty guest performances by aforementioned Alex Webster on bass guitar, Ross Dolan of Immolation on backing vocals, and, last but not least, Moyses Kolesne of Krisiun on lead guitar.
Let the dance of death begin…...

Says Eriksson: “As a long-time fan of death metal it feels almost surreal to have members of four of my all-time favorite bands – Alex Webster (Cannibal Corpse), Ross Dolan (Immolation), Tomas Andersson (Seance) and Moyses Kolesne (Krisiun) – helping me to breathe sonic life into a long-extinct organism”. He continues: “I could not be happier and more honored to have these killer musicians onboard this eclectic paleo philanthropic project”.

The track deals with a 400 million-year-old gigantic marine worm that Eriksson and co-authors described scientifically in 2017 (www.nature.com/articles/srep43061). As it so happens the species proved to be new to science and was named Websteroprion armstrongi in honor of, yup, you could see that one coming; Alex Webster. Eriksson’s song lyrics deals with the inferred “death dance” of this ancient ambush predator and its prey; a sort of lethal underwater cat and mouse play that ultimately leads to the inevitable blood-soaked termination.

Tomas Andersson (also of Freevil and Denata) acted musical captain, with input from Eriksson, and composed a trashy death metal song with a distinctive rhythmic feel with the aim of transforming the fossil into a brutal ear worm (pun intended). Says Andersson: It’s the fourth time I work with Mats and it’s always a real pleasure. For me, it’s a very different and exciting way of composing and making something unique that hopefully will make justice for the fossil beast and please everyone involved. This time around we got one hell of a nice team on board and I could not be more pleased with the result! Total domination! Whereas Andersson recorded all rhythm guitars and drums, bass magician Alex Webster (also in Conquering Dystopia and Blotted Science) provided the pummeling deep tones in order to, figuratively speaking, resurrect the fossil creature that bears his name. Brazilian guitar monster Moyses Kolesne delivered some leads and a guitar solo dripping with eerie metalized passion.

While Eriksson added some effect vocals, the main singing duties were subdivided between Andersson and New York’s finest deep growler; Ross Dolan. Andersson’s raspy and somewhat thrashy voice in the verses are contrasted with Dolan’s guttural rumble which makes the chorus parts and break off sections sound rotten evil and as deriving from the very depths of some ancient hell.

So get ready to submerge yourself into an ancient ocean and behold the dance of death!